Batman: the Brave and the Bold Wiki
Register
Don't have an account?
Sign In
Advertisement
in: Heroes, Characters, Humans,
and 17 more

Plastic Man is a former sidekick of Batman.

Plastic Man aka Edward “The Eel” O’Brian was once a small time gangster known for his ability to slip away from capture. Lured by the dream of making it big with fortune, he became a henchman for Kite Man. One night, while robbing the safe of Crawford Chemical Works, Batman intervened. O'Brian attempted to escape but a Batarang disabled his kite and he fell into a vat of acid. Batman pulled O'Brian from the vat and took him in for hospitalization. O'Brian soon discovered his physiology was altered by the acid and he could stretch himself to any length and transform into any object possible. Whether it was out of guilt or not, Batman assumed full responsibility for O'Brian's rehabilitation after he testified against Kite Man in a court of law. Batman vouched for him in front of the judge, the parole board, and later, the Justice League International.

As Plastic Man, he began to turn his life around despite the constant call of cash. Tired of being kept on the sidelines, Plastic Man infiltrated Babyface's gang under the alias, Stretch Wheeler. They robbed the First National Bank and left Plastic Man for dead. Batman saved his life again and the duo tailed the gang to a high speed train.

During Los Muertos, Plastic Man was recruited by Batman to aid in capturing Gentleman Ghost. During the confrontation, Plastic Man was distracted by Ghost's stolen money leaving Batman with a near death if not for Fire. On route, Batman and Plastic Man intervened on a routine robbery conducted by Gorilla Grodd. With the Batmobile destroyed, Plastic Man escorted Batman to Dinosaur Island where they discovered Grodd's latest plan to take control of the world. With Batman caught, Plastic Man vowed to make things right and temporarily overcame his greed to battle Grodd's army. Despite this and fame with the public, the rest of the world's heroes were not so sympathetic of Plastic Man and often dismissed him from joint missions.

In case any of his allies were compromised, Batman devised methods to defeat them. After Owlman escaped his prison in the Batcave, he stole Batman's files and implemented the weapons. Owlman used a device that froze Plastic Man. Later on, Owlman placed him on a taffy puller, very similar to when Plastic Man and Elongated Man fell on a puller trying to stop Babyface. Plastic Man fought crime by himself, with allies, and his on and off again sidekick, Woozy Winks.

Plastic Man settled down with his sweetheart, Ramona, and started a family with their newborn son and pet dog, Schnitzel. He struggled to maintain self-control from going back to crime and be a superhero along with that of a family man and father. One day, while taking Baby Plas and Schnitzel to the Metropolitan Museum of Art, Plastic Man and his family were targeted by Kite Man. After Kite Man stole 2.2 grams of Plastic Man, he devised a way to neutralize the hero. Plastic Man impulsively went after Rubberneck instead of staying home and got his family kidnapped. Batman, Plastic Man, and Woozy Winks defeated Kite Man and Rubberneck. Plastic Man then launched himself into the air and saved his family from an impending lightning bolt. Some time later, he was attacked by Faceless Hunter on Haney Avenue and implanted with a Starro clone. After the invasion, Plastic Man and Elongated Man were used to restrain any stragglers still infected.

Although he was supposed to be reformed, Plastic Man still had many criminal tendencies. For instances when he and Batman are confronting Gentleman Ghost who has committed a robbery, after Batman breaks the Gentleman Ghost’s bags holding the stolen cash, Plastic Man goes after the money instead of fighting. When infiltrating Gorilla Grodd’s hideout to save Batman, he is distracted by Grodd’s stolen gold and diamonds, and delays going after Batman to take some for himself.

Despite this, Plastic Man still has a heart and becomes serious for instance when he infiltrating Grodd's hideout trying to rescue Batman But, he sees the money and tries to stay focus he sees a gem and quickly gets the money that's when he launches the money at his soliders to give Batman enough time to disable the E Ray and he also relaized what he's done after letting Kite-Man kidnap his family he then, gets turned to stone by his machine he is soon turned to normal and battles Kite-Man and saved his family and he also sang the Yankee Doodle Went to Town trying to get Uncle Sam back to life.

Plastic Man has the ability to stretch his body into just about any object. He’s been seen changing into a shovel, cash register and even a car. Normally he uses his hands like large mallets. 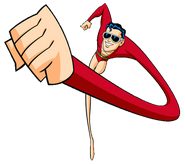 Plastic Man's wife, Ramona, is probably named after Ramona Fradon, the artist on the Plastic Man comics in the seventies; she also worked on Aquaman, as well as several Superman and Batman stories, and is the co-creator of Metamorpho.