Batman: the Brave and the Bold Wiki
Register
Don't have an account?
Sign In
Advertisement
in: Villains, Characters, Batman Villains,
and 6 more

The Joker is a supervillain and the longtime archenemy of Batman.

It has been agreed on that a man with the alias Jack Napier was a sadistic Gotham mobster who started out as an enforcer but quickly became a higher ranking figure. Craving to carry out petty theft again, he created the alter ego of the Red Hood. During an attempted robbery botched by the Caped Crusader, he fell into a vat of chemicals but survived. With his skin permanently bleached and lips fixed in a permanent smile, he became the Joker. The Joker engaged in psychopathic crimes but wanted to prove his genius to the world by defeating Batman and Robin. Some are not convinced the Joker is a normal psychopath but one who treads the line that separates sanity and insanity. He still is a murderer, but his actions are planned, calculated, and executed with a certain flair and sophistication. The Joker modeled himself after the Weeper, the first super villain to use a motif, and used laughter as his.

When Owlman began a crime spree disguised as Batman, the Joker found himself outclassed. Eager to restore the natural balance, the Joker devised a plan to team up with the real Batman. He managed to convince Batman that his chaotic nature would be the winning edge in the coming showdown. The Joker was enamored when he found himself in the Batcave and that Batman kept mementos of their past encounters. Although the Joker dabbled in being a hero, the lure of killing Batman was too strong when Owlman presented him with a deathtrap. Batman took this into account and transported his alternate allies to the battle. While being taken into custody, the Joker relished in having the last laugh someday.

Joker later became part of Bat-Mite's imagined day as Batman. The real Joker soon broke out of prison and went on another crime spree in his Joker Mobile. Batman and Green Arrow followed in hot pursuit. Joker was unable to getaway and his vehicle was left hanging on Gotham's golden statue of Justitia. He was incarcerated at Arkham Asylum but escaped a short time after Music Meister was defeated. The Joker was one of the Earthlings selected by Mongul to take part in a race for control of the Earth. Months later, he attended a weapons sale and was less than pleased to learn the seller, Joe Chill, was responsible for the creation of Batman. The villains proceeded to beat Chill to death but Batman intervened. The Joker tried to steal the Sonic Disrupter but weakened the roof and caused a collapse. The Joker escaped with the rest of the villains.

Shortly after escaping a special Arkham Asylum cell designed by Batman, the Joker tried to rob the Museum of Comedy with Harley Quinn and four henchmen disguised as silent movie era actors Harold Lloyd, Buster Keaton, Roscoe Arbuckle, and Charlie Chaplin. While trying to circumvent a promise to not use his powers, Bat-Mite gave them to Joker by mistake instead of Batman. After creating the Joker-Mite to deal with Bat-Mite, Joker declared he would deal with the one thing that always bothered him, Batman always wins. Using his magic, Joker killed, resurrected, and subjected Batman to various death traps he couldn't escape including an acid bath, flame throwers, grinder, sharks, beheading by guillotine, vehicular manslaughter by train, and electric chair.

Batman managed to outsmart Joker and lured the villain to venture into his mind. Batman showed Joker a world without Batman where he would have no one to match wits with, be perfectly sane, and live a normal life. The Joker was overwhelmed and couldn't handle the thought of being normal. He accepted defeat and promised to give Bat-Mite back his powers if he were allowed to leave Batman's mind. Joker was taken into custody as a drooling mess. The Joker was one of many to appear in Alfred Pennyworth's detective story, "The Knights of Tomorrow!". In a final battle atop the Gotham Bay Bridge, Joker fell to his alleged death. He survived and lay low for many years. However, he learned that all the chemicals he exposed to himself over the years took its toll and he had 6 months left to live. Joker tried to train various apprentices but they did not survive the process of going insane. One finally did and was fashioned into the Joker's son. He eventually figured out the identity of the Batmen and sought to destroy all of them in his final plan then douse all of Gotham City in Joker Gas. The second Batman and Robin defeated the Jokers and saved the day.

In a parallel universe, the Joker once teamed up with the Penguin to try and locate the hidden fortune of the deceased gangster Bennie Bodog Benson. After narrowing the location of the treasure to a music hall, they crafted a costume and haunted the theater as the Foot light Phantom to scare off the public. On the night of a performance by Weird Al Yankovic, Mystery Incorporated arrived and became entangled in the mystery of the phantom. When they discovered the phantom was the Joker, the Penguin appeared and helped tie up the gang. Joker devised a giant balance weight death trap to kill them. With Scooby forced to gorge on Scooby Snacks, the others would fall to their doom. Batman and Robin arrived to save them and stop Joker and Penguin. Bat-Mite was observing this event and gave Batman, Robin, Scooby-Doo, and Shaggy Rogers the ability to fight back and defeat the duo. The Joker almost got away but was neutralized by Weird Al.

After receiving a distress call from the future, the Joker teleport to Tiger City and helped Misfit take control of the Omega Warhead. Upon returning to Gotham City in the present era, the Joker extracted Fisherman before he could be arrested in Atlantis. Concerned with Batman and his latest invention, Joker appeared at a seedy dive usually frequented by rogues of lesser caliber. It was there he met his inspiration, the Weeper. The Joker then decided to pull off the greatest prank and help Weeper realize his true destiny as king of crime in Gotham while destroying the Batprobe at the same time. However, Weeper hesitated and quit then the Joker was arrested by the police. He escaped while on route to Arkham Asylum and regrouped at a hideout in an abandoned Busted Flush Plumbing building. The Joker and the Weeper reunited to take down the Batprobe but they were ultimately defeated by Batman. Just short of accomplishing his plan, the Joker weeped while the Weeper laughed.

Soon enough, Joker escaped and stole from every lab in Gotham City. He then created a giant mock Jack-In-A-Box vehicle dedicated to destroying every major city. Joker was amused by reports of Batman despite his major injury and captured Aquaman, Green Arrow, Captain Marvel, and Plastic Man. Batman arrived in an exo-suit and saved the day. Joker attempted to shock Batman with his joy buzzer but was instead shocked into submission. A short time later, the Joker rigged Batman and Vicki Vale to a giant exploding pie death trap. Batman summoned the Whirly-Bat and defeated the Joker. He resurfaced at the Hall of Doom and suggested he, Lex Luthor, and Cheetah switch arch-enemies. Joker was teleport to Paradise Island to battle Wonder Woman. Using a cunning disguise, Joker infiltrated an Amazon match and doused them all in Joker Toxin. He then tasered Queen Hippolyta and Wonder Woman. Joker proceeded to kill Wonder Woman but at that moment everyone was teleport to the Hall of Doom. When the Big Three fought the trio, Joker was last to fall.

In reaction to the Batmen of All Nations, Joker founded his own tribute society: the Jokers of All Nations headquarters as giant statues commissioned by Batman. Joker then proceeded to offer up his housewarming gift, a flamethrower. Batman knocked out Joker with an uppercut. The Joker later kidnapped Batman and subjected him to the "Man of the Hour - Joker's Superhero Celebrity Roast" in an abandoned warehouse. He also kidnapped Roast master General Jeffrey Ross and forced him to also roast Batman. However, Ross distracted the villains in attendance while Batman escaped. Joker attempted to escape with Batman's Utility Belt but Ross decked him.

The Joker's sanity can't be called to question, since it's obvious he doesn't have any. An unpredictable psychotic whose more likely to laugh in the face of death and defeat than recoil, the Joker is rarely ever shown to be scared .taking life as one big joke that only he gets.however he despite this he does have a fiery temper and is homicidal when angered and there also have been times where he was actually scared of die in when it didn’t make him laugh or unfortunately benefit him in any way at all.

That is not to say he doesn't have other emotional states other than "giggling madman". He found Owlman's impersonation of Batman to be irritating since it changed the dynamic he had with Batman. He cried after being caught with the Weeper, and showed mortal terror at the prospect of being sane.

He views Batman as not just a thorn in his side, but as an opposite — one he's not truly willing to get rid of, during the time he had Bat Mite's power he could and did easily kill the Dark Knight multiple times only to resurrect him and then ultimately realizing how horrible things would be for him if he ever won.

Joker was willing to team up with Batman to defeat Owlman and even saved Batman and a boy’s life in two different occasions. Joker did seem hesitant to betray Batman when he did and sadly commented that if things were different they could have been friends. Joker genuinely respected and cared for the Weeper and tried to help him get back in his prime. He wasn’t abusive to his girlfriend Harley Quinn either.

Joker has no superpowers, but is an expert of hand to hand combat, and a master marksman. He also carries razor sharp playing cards, has a deadly hand buzzer on his hand, trick streamers that wrap up the target up his sleeves, his jacket can turn into his version of Batman's jet pack and even a bazooka hidden in his pocket and has been seen with machine guns and pistols one of which fires a bullet with two boxing gloves that burst out before impact 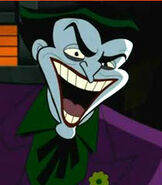