Batman: the Brave and the Bold Wiki
Register
Don't have an account?
Sign In
Advertisement
in: Heroes, Characters, Justice League,
and 4 more

"Eh, keep complaining; gives me more time to show you up."

Green Arrow is a hero from Star City and was a member of the Justice League. He is the former mentor of Speedy and a good friend of Batman.

Manufacturing heir, Oliver Queen is renowned for his billionaire status. While on a South Sea cruise, he was knocked overboard and washed ashore on Starfish Island. In order to survive, Queen fashioned a crude bow and arrow. He was eventually rescued and returned to his home in Star City. During a costume party, he dressed like Robin Hood and stopped a robbery in progress. Queen realized how restless he had become with crime and violence in the world and became Green Arrow. He later took on a partner named Speedy.

Armed with a array of special trick arrows (combat, exploding and suction to name a few), Green Arrow teamed up with his friendly rival Batman over the years. They first met when Arrow was visiting Gotham City in search of a kidnapped wealthy heiress from Star City. Left for dead by Cavalier and Ruby Ryder, the duo were forced to work together and captured the villains. Their competitive spirit drove each other to be at their best and one up each other. However, Green Arrow appears to have a clear respect for Batman (and vice-versa) in the form of similar motifs such as the Arrow Plane, Arrow Car, and Arrow Cave. Green Arrow's belt is also a fitting homage to Batman. A non-visible console on his belt activated a homing arrow.

Rise of the Blue Beetle!

On one occasion, Batman and Green Arrow went after Clock King only to be suspended in another death trap. After escaping Clock King's lair, the duo soundly defeated the Clock King before he could finish robbing a museum. On other, Arrow and Batman competed over who was destined to pull Excalibur from stone. When it was revealed both of them needed to pull the sword together, they called a truce from their rivalry.

Day of the Dark Knight!

Green Arrow and Batman teamed up once again to stop a jail break at Iron Heights Prison. They encountered Merlin who transported them back in time to help him stop Morgan Le Fey from taking over King Arthur's kingdom. While on their way, the sorceress appeared before them and placed Batman under her spell. Green Arrow fought him, but was defeated. After Batman is freed from Le Fey's spell, the two heroes manage to defeat the sorceress with Arthur's sword. Merlin thanks them and returns them to their timeline where they continue to compete against one another.

Dawn of the Dead Man!

Green Arrow and Speedy pursued a career thief in 12 cities and 3 continents. They finally caught the criminal in London but were contacted by Batman to dig up his body. Only another super hero could deal with the booby traps lining his coffin. Afterwards, Arrow and Speedy helped fight off Gentleman Ghost's un-dead army.

Game Over for Owlman!

In case any of his allies were compromised, Batman devised methods to defeat them. After Owlman escaped his prison in the Batcave, he stole Batman's files and implemented the weapons. Owlman used a device that induced vertigo on Green Arrow. While under custody of Owlman, he was tied to a giant bullseye board with a giant bow and arrow aimed at him.

Legends of the Dark Mite!

While apprehending Copperhead at a jewel heist, Green Arrow was visited by Bat-Mite, now dressed as Arrow.

Mayhem of the Music Mister!

Months later, Green Arrow teamed up with Aquaman and Black Canary to stop Gorilla Grodd, Black Manta, and Clock King from stealing a United Nations communications satellite. Instead, all six were put in a trance by the Music Meister and were nearly incinerated if not for Batman. Arrow, still harboring a crush on Black Canary, tried to reach out to her but only to fail as Canary pined over Batman. After Music Meister was defeated, Black Canary and Green Arrow finally were in tune together.

The Fate of Equinox!

Soon after, he teamed up with Red Tornado to defeat Grodd and Clock King only to be teleported to Gotham City by Dr. Fate in a bid to defeat Equinox.

After being teleported to Mongul's Death Race, Green Arrow encountered a very different Batman. However, when Batman referenced a former mission incorrectly, Arrow realized his plan was to distract Mongul while the other heroes sabotaged his Warmoon. When aboard the moon, Green Arrow revealed a device hidden in his shoes that could generate an electromagnetic pulse. While Woozy Winks activated it to weaken their prison cell force field, Arrow used Plastic Man as a bow and shot Green Lantern (Guy Gardner) into the hole to get his power ring back he releases them and go to Warmoon's energy core and blows it up Mongul was soon defeated and Plastic Man relaizes Batman and Green Arrow had a secret plan. A short time later, Green Arrow faced off against the Clock King when he robbed the Star City Bank. He was surprised to see Aquaman on scene to assist in saving the day.

Green Arrow teams up with Aquaman (Who is on a Family vacation) to fight Clock King and his henchmen. They easily apprehend the henchmen and chase after Clock King into a diner where he takes a hostage. Together, they defeat the criminal without endangering the hostage and Aquaman then returns to his family.

Green Arrow, Batman, and Aquaman arrive at a warehouse to stop a group of minions for Ra's Al Ghul, but are surprised to find their sidekicks doing just that. The argument between mentors and proteges causes the assassins to flee. At the Hall of Justice, Batman explains to the teenagers that Ra's Al-Ghul is a dangerous criminal, but they demand to be treated as full fledged heroes and not sidekicks, which promotes Green Arrow to claim that he's always treated Speedy well, at which everyone gives him a pointed look for. Batman eventually agrees to give them a mission of their choice: Either on an island where energy emissions , or an island where there is no sign of life. The teens pick the latter which turns out to be Ra's' hiding place. Green Arrow and the other two mentors fall into a trap but escape. Once reunited with their proteges, the mentors agree that their sidekicks have proven themselves. Arrow apologizes to Speedy if he was being out of line, but the young archer says that he hadn't been out of line, but rather, a jerk.

The Super Batman of Planet X!

Batman and Green Arrow teamed up again to take down space pirates who stole the Emerald Eye of Ekron. However, in mid-battle, Batman activated his Batrocket's shields and created a wormhole by mistake. After being pulled in, Green Arrow was left alone to battle the pirates. Eventually, Arrow succeeded but had to replicate the conditions that created a wormhole to Batman's destination. Shortly after Rhotul was defeated a second time, Arrow arrived on Zur En Arrh. He was elated to discover super powers on the planet but the Batmen cut his time short. With Batman aboard the Arrow Orbiter, Green Arrow activated another wormhole and returned home to Earth.

The Siege of Starro!

While surveying the city from rooftop, Green Arrow was taken surprise by Faceless Hunter. A mind-controlled Speedy fired a trick arrow with a Starro clone on it at Arrow. The Faceless Hunter used Green Arrow's home city as the source of a signal designed to guide Starro to the planet Earth. He later assisted Batman in space. They defeated a horde of aliens trying to invade Earth disguised as meteors.

Night of the Batmen!

After Batmen is critically injured and put out of commission, Green Arrow, Aquaman, Captain Marvel, and Plastic Man dress up as the caped crusader and protect Gotham from its criminals. Green Arrow fights and defeats Deadshot, Cavalier, Babyface, Sportsmaster, Fun Haus, Killer Moth and Gaggy, Eventually, the four Batmen are captured by the Joker, but are rescued by Batman. After defeating Joker, they, along with the Batmen of the Mutliverse, aid Batman in fighting crime.

Having worked with Batman on several occasions, Green Arrow is one of Batman's close friends. Although the two often joke between themselves that they are the better hero. Green Arrow is also an experienced hero, and when the heroes think Batman has gone rogue, he leads the others in tracking him down.

Much like Batman, Green Arrow has no super powers, instead using his trick arrows, including his trademark punching bag arrow. Green Arrow is also known as the worlds greatest archer having nearly perfect accuracy. He also fights crime from the Arrow Car. Green Arrow is also an extremely skilled hand to hand combatant able to execute an offhand backhand as if it was second nature.

In Death Race to Oblivion, it is revealed the Batman and Green Arrow know each other so well that they are able to communicate in a code which refers to past missions and events that they went on together.

Throughout the episode Mayhem of the Music Meister, Green Arrow tries to get Black Canary’s attention but fails to do so because she is too busy trying to get Batman’s attention. At the end of the episode however, he manages to get her attention by singing (If Only) and the two fall in love.

Green Arrow and Batman are rivals. They always compete with one another when it comes to many things such as who can defeat more criminals, or who's car is better, etc. Despite this rivalry however, the two remain good friends, and respect one another. 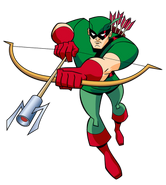