Batman: the Brave and the Bold Wiki
Register
Don't have an account?
Sign In
Advertisement
in: Episodes, Season Three

"I've Got Your Number Rubber-Head It's 45. As In Caliber.

In the adventure of the Space Safari, Jan, Jace, and Blip go to the planet Zantor for a picnic. They hear a howling noise in the distance and fly to investigate and find several creatures penned up in energy cages. Their captor, Creature King, flies down on a winged dragon and vows to mentally control the creatures and use them to conquer the Ghost Planet. Jace calls their mentor, Space Ghost, who tells them stay out of sight. He then flies towards Zantor with his ally: Batman. Creature King spots the young heroes and opens fire. He sends his space dragon after them and its sonar allows it to spot them despite their inviso-belts. The creature snares Blip and prepares to swallow the monkey, but Batman arrives in time to fire an electro-missile into its throat, stunning it. The two adult heroes take to the sky and freeze the space dragon, and Creature King unleashes his other creatures. Space Ghost stuns the astrodactyls, while the moon ape grabs Batman and prepares to eat him. However, it’s merely a ruse so that Batman can throw sleep gas canisters down its throat, knocking it unconscious. Meanwhile, Creature King unleashes the rest of his menagerie from his spaceship, but Space Ghost makes quick work of them. Batman knocks off Creature King’s mind-control helmet, and the villain’s creatures take him away while the heroes share a laugh.

Mr. Freeze has captured Green Arrow, Aquaman, and Plastic Man and froze them in giant icicles above a vat of popsicle mix. Plastic Man is unable to stretch free since the cold makes him brittle. As they wait for death, Green Arrow remembers how he first met Batman...

Green Arrow is visiting Gotham City when Cavalier kidnaps a wealthy heiress. He pursued in the Arrowmobile, but Batman arrives in the Batmobile and tells him that he’ll take it from there. The Emerald Archer points out that he was there first and that the victim is Ruby Ryder from his hometown of Star City. Batman reluctantly gives his new ally the background on Cavalier, who drives to a castle and closes the portcullis behind him. The Caped Crusader insists on going in alone and flies over the walls. However, when he lands he sets off a spring trap, throwing him into a stockade. Green Arrow uses an arrow line to get over the wall and goes inside, only to face robot armored knights.

Batman uses a shield to reflect his laser beam back at the stockade and free himself. He goes past Green Arrow, who is surrounded, and heads for the upper floors of the castle. Cavalier is waiting and tosses him a sword, and the duel begins. Green Arrow runs by, claims he doesn’t have enough arrows left to help, and runs up the stairs to find Ruby. Cavalier disarms Batman, who swings up via a chandelier rope. He and Green Arrow burst into Ruby’s room and both declare that they’re rescuing her. Cavalier arrives to tell them that Ruby has them, and the heiress tasers the two heroes unconscious.

Cavalier and Ruby tie the heroes up in the courtyard. When they recover consciousness, Batman explains that Ruby’s billion-dollar trust fund couldn’t keep up with her lifestyle, so she staged the kidnapping to get access to the trust fund and then split the ransom with Cavalier. Cavalier sets the heroes’ pyre on fire and departs with Ruby to collect the ransom. The heroes agree to work together and Green Arrow uses a remote to activate the feather-arrow on his hat and snare Batman’s nearby utility belt. Once they’re free, Green Arrow uses a catapult to fire Batman onto the hood of the villains’ car. Cavalier leaps out while the car, with Batman and Ruby, goes off a cliff. Green Arrow easily knocks out Cavalier and Batman flies back up with Ruby. Green Arrow suggests they might work together more often, but both heroes quickly dismiss the idea.

After Batman rescued him from a life of crime, Plastic Man goes undercover as Stretch Wheeler as part of Babyface’s mob. They rob a bank, but Babyface sees through Plastic Man’s disguise and glues him to a wall. The mobster leaves a bomb on a sixty-second timer and explains that the police will find Plastic Man’s corpse and assume he went back to crime. Once the criminals leave, Plastic Man elongates his buttocks and throws the bomb up into the sky. However, Batman catches it, defuses it, and brings it inside. As Batman dissolves the glue, Plastic Man insists that he can’t sit on the sidelines forever.

The heroes go after Babyface, who is using a bullet train to make his escape. Batman turbo-charges the Batcycle and they board the train, but Babyface’s thugs cut the engine loose from the rest of the train. Undeterred, Plastic Man stretches across the gap and knocks the thugs back, and then grabs the engine car. As he holds the train together But Hammertoes Beats Up Plastic man Fingers with a Hammertoe Saying "This Little Piggy Went to Market"! "This Little Piggy Stayed Home" and "This Little Piggy..Uh, Got His Hand Smashed"!! Batman knocks one of the thugs into the water and saves Plastic Man from the second. They board the engine and take out the third and final thug, but Babyface opens fire. Plastic Man removes the magazine from the villain’s tommy gun and Batman delivers the final blow. The elastic hero congratulates Batman on their teamwork, and gets a scowl in return.

Aquaman sneezes, causing Green Arrow to drop the lockpick. The King of Atlantis takes the opportunity to cheer his fellow prisoners with the story of his first team-up with Batman.

Before Aquaman can finish his story, Mr. Freeze comes in to collect his frozen trophies and have his revenge. However, Batman arrives and frees his comrades with heat pellets. Undeterred, Mr. Freeze threatens to unleash a wave of glaciers on Gotham City. He runs outside to summon his gang of parka-wearing thugs. However, they prove no match for the assembled heroes, and Mr. Freeze is quickly disarmed and dispatched. As Batman, Plastic Man, and Green Arrow go off to melt the glaciers, Aquaman stays to watch the villains and finish his story. 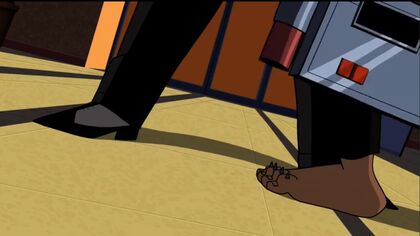 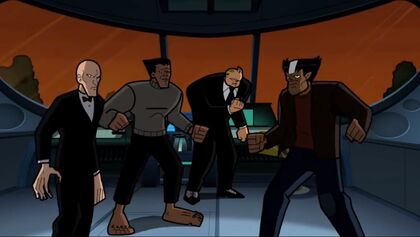 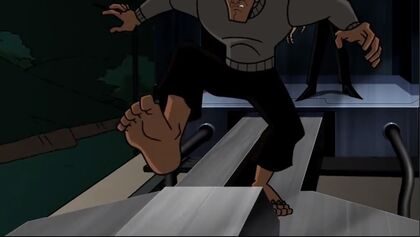 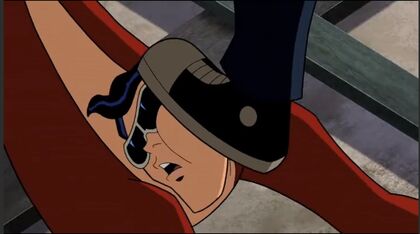 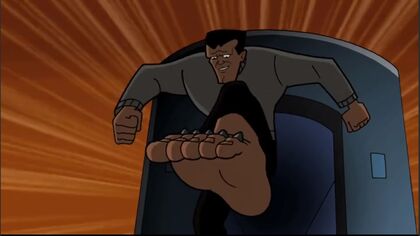 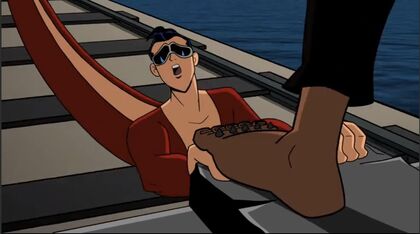